Introduction: The walk starts by passing through parkland past the front of Wimpole Hall. Later the path climbs past farms comprising part of the estate. Here each field you pass has an information board describing the present crop, saying what was planted in the previous season and what is planned for the next crop. The notice also explains what treatment(s) the field has received. At the top of the hill Â­ halfway round the walk - pass reservoirs and an Ordnance Survey trig Pillar. Not surprisingly, from this high point there are wide views of the surrounding countryside. The return is along rural footpaths and bridleways to Arrington.

The district around Arrington is one of undulating rich farmland, well dotted with small woods and plenty of mature trees. Just to the north of the inn is the 350 acre estate of Wimpole Hall and its associated Wimpole Home Farm, owned by the National Trust. The Earls of Hardwicke were the owners of Wimpole Hall in the 18th and 19th centuries. The road past the Hardwicke Arms, now called Ermine Way, was the ancient Roman road, Ermine Street, from London to the North. The grand entrance gates to Wimpole Hall which face onto the old road are rarely used now.

How to get there: Arrington lies on the A1198 road between Huntingdon and Royston. From the north, leave the A14 at the Godmanchester interchange then follow the A1198 for 13 miles. From Cambridge and the east take the A428 towards St Neots. Turn left onto the A1198 at the Caxton Gibbet roundabout. The Hardwicke Arms is on the main road in the village.

Parking: The inn has ample parking at the rear, and it is also possible to park on the roadside. 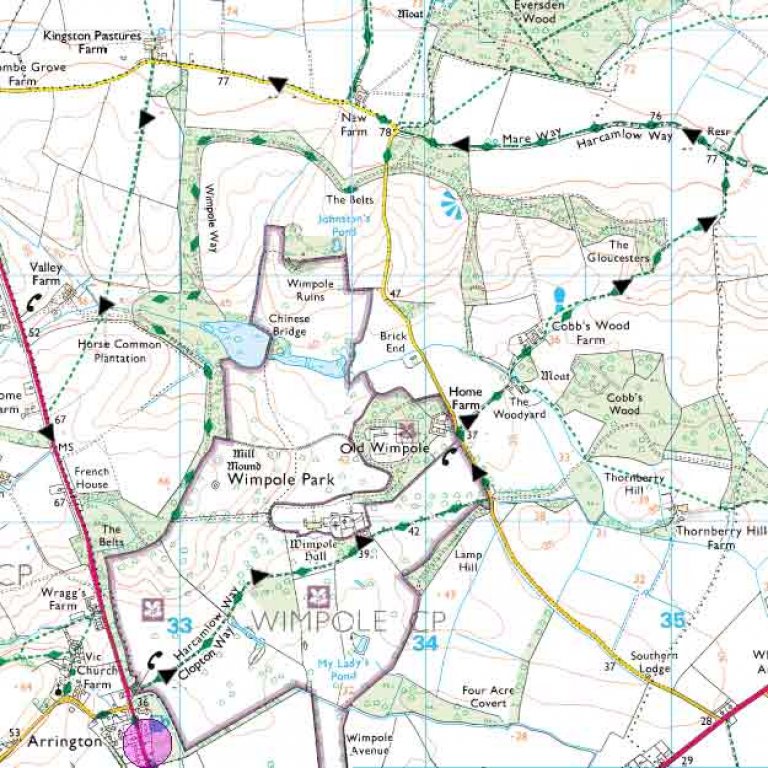 From the Hardwicke Arms walk north along the road, Ermine Way, towards Huntingdon. In about 150 yards, by the massive wrought-iron ornamental entrance gates of Wimpole Hall, go through an iron wicket gate to the right of the main gates, and walk along the tarmac drive. Pass through an iron kissing-gate beside a cattle grid. Passing through two more kissing-gates, follow the tarmac drive as it sweeps round to the left and then to the right, crossing parallel to the front of Wimpole Hall, 100 yards away to the left, then pass the red-brick stable block on your left. Continue on the drive for Â¼ mile to reach a road. Turn left along it. Pass a telephone box and opposite the black weather-boarded thatched barns of Home Farm turn right along a wide gravel farm track. Before setting off along this track read the informative board at the junction. You will be following the walk described on the board for some of the way.

Pass on the right a bungalow, Keeper's Cottage, then keep left, crossing a bridge, over a small but deep stream. Later pass a creamÂ­ washed farmhouse, Cobb's Wood Farm. The surfaced road ends here. Continue straight on along an earth farm track, with a ditch on your right. In 100 yards or so the ditch on the right ends and you bear slightly right, up the hill towards the woods.

When almost at the top of the hill, where you pass a wood on the left, pause on the seat to enjoy the panoramic views. Where the wood ends you carry straight on, still on a cart track, with a hedge and ditch on the left. When the cart track turns right, keep straight on, on a wide grass path, with a small triangle of young mixed woodland on the right. This is called French's Corner.

In about 50 yards, at the far end of the wood on the right, turn left at the waymark with 'Ramblers' written in poker work on the shaft. You are still on a grassy headland path with a wide field on the right. You now come to the corner of the field, where there is a damaged steel footpath sign. Go left towards the water tanks of the Cambridge Water Company, and there bear left between the water company's fence on the right and the hedge on the left. The path narrows a little bit, later widening out into a delightful grassy bridleway. Note the Ordnance Survey trig point. From here you can enjoy wide views.

As you approach some woodland the path becomes a cart track. After following the edge of the wood for about 100 yards the cart track goes right. You go straight on along a bridleway through the wood. You come out to a road where the bridleway makes a sharp bend. Go straight on along the rural road, passing a farm on your right. Do not turn off right when 'The Wimpole Way' goes right, but keep on the road until you reach Kingston Pastures Farm, a three-storey building on the right. Here, opposite a barn, go left at a footpath sign, on a grassy headland, with a hedge on the left. When the hedge and its few trees end you then have a deep ditch on your left.

At the end of the field you go through a hedge, and are confronted by a wide field, where the route has been marked out. Should the markers not be there you would navigate by going initially towards a prominent house on the skyline, and then later swing left a little to the far side of the field to cross a stile and then walk across the pasture down to a bridge, and a double farm gate. Keep on in the same direction to go through another gate. Follow a grass path along (possibly) a crop division, still going in the same basic direction. The well-used path curves right, leading to a sleeper bridge and out to the road. Turn left. There is a footway on the far side of the road. Follow this all the way down into Arrington. 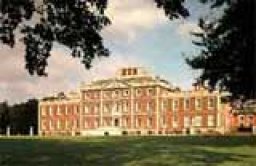 Other local attractions: The National Trust property Wimpole Hall, a large 18th century style mansion, is a few hundred yards away. There is also the NT farm, Wimpole Home Farm - a working farm with rare breeds, and with a collection of farm machinery as used here over the last 200 years. Both are open from the end of March until the beginning of November, but not on Mondays or Fridays, except bank holiday Mondays. They are also open on Fridays from mid July to mid August. For times ring 01223 207257.

Other publications: CAMRA's Good Beer Guide, for more details of other pubs in this area serving excellent real ale. The Good Beer Guide can be purchased on-line at www.camra.org.uk, or by mail order (call 01727 867201).