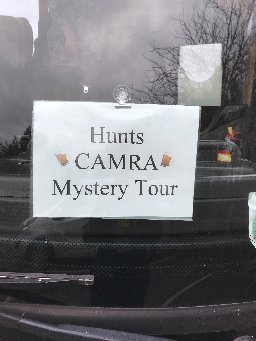 On Saturday 17th November 2017 a group of Huntingdonshire Branch CAMRA members braved the unknown and partook in a mystery tour. All we knew in advance was that we were likely to be visiting a brewery at some point and of course a number of pubs in (and just outside) the branch area. Brewery we did, and pubs we did and everyone had a really good day out, we got to know each other, and sampled more than a few good beers.

As the coach came off the A428 heading into Dry Drayton, a few of the group guessed that we were heading towards the Lord Conrad's Brewery. This was indeed the first stop. We had a brewery talk from brewer Jon Neale, then all headed to his brewery bar where he had a selection of his beers for us to enjoy. And enjoy we did; the beer on offer was the Spiffing Wheeze, Lobster Licker and bottles of Conkerwood, and for the cider drinkers, bottles of Angry Wasp. For every drink we were asked to donate to Cancer Research UK, a cause close to Jon's heart. Thanks to the generosity of Jon in providing the beer and the drinkers donations, we raised a total of £250!! Good Job everyone. 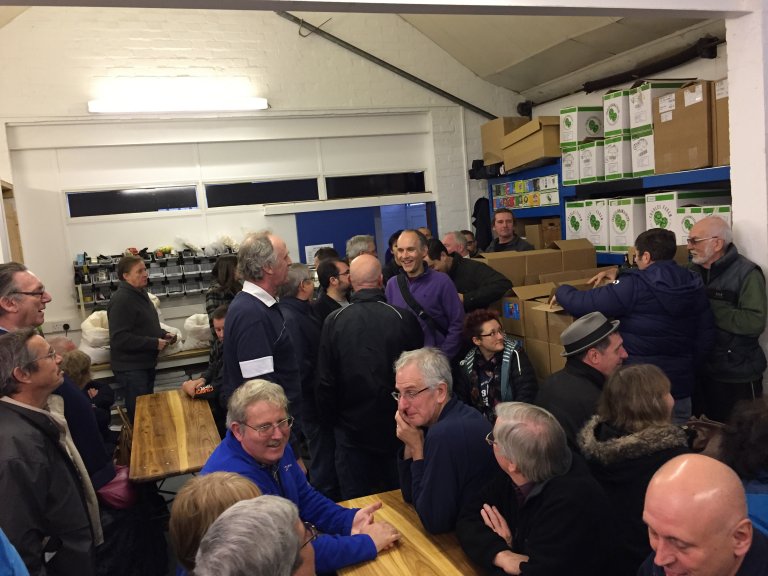 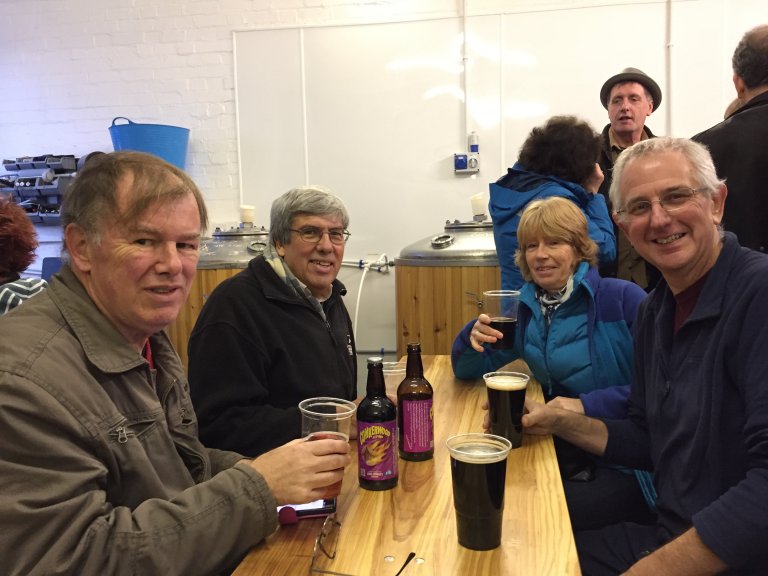 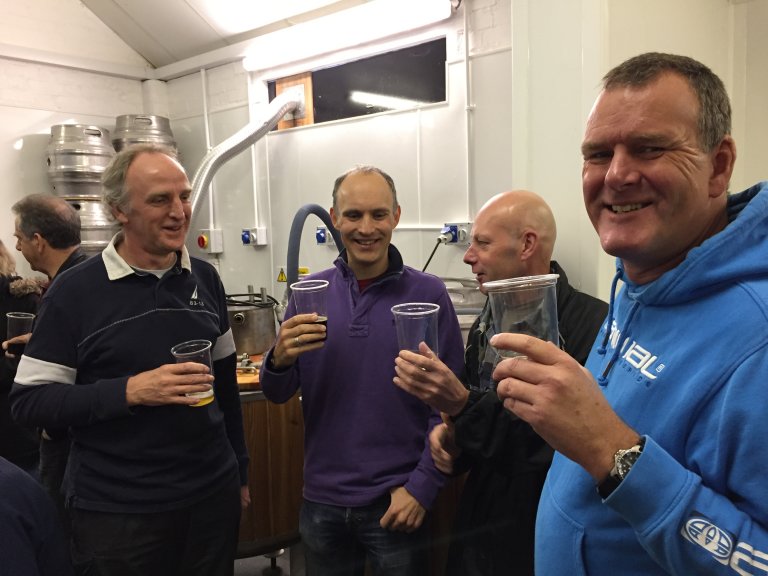 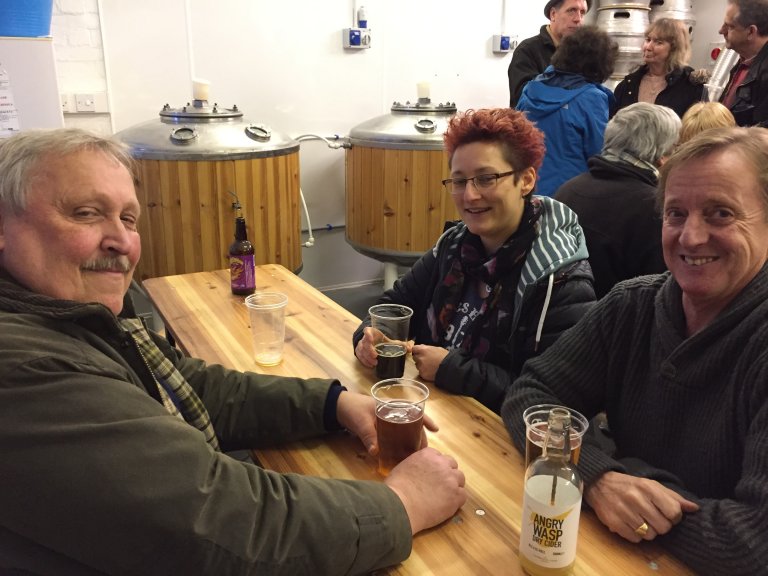 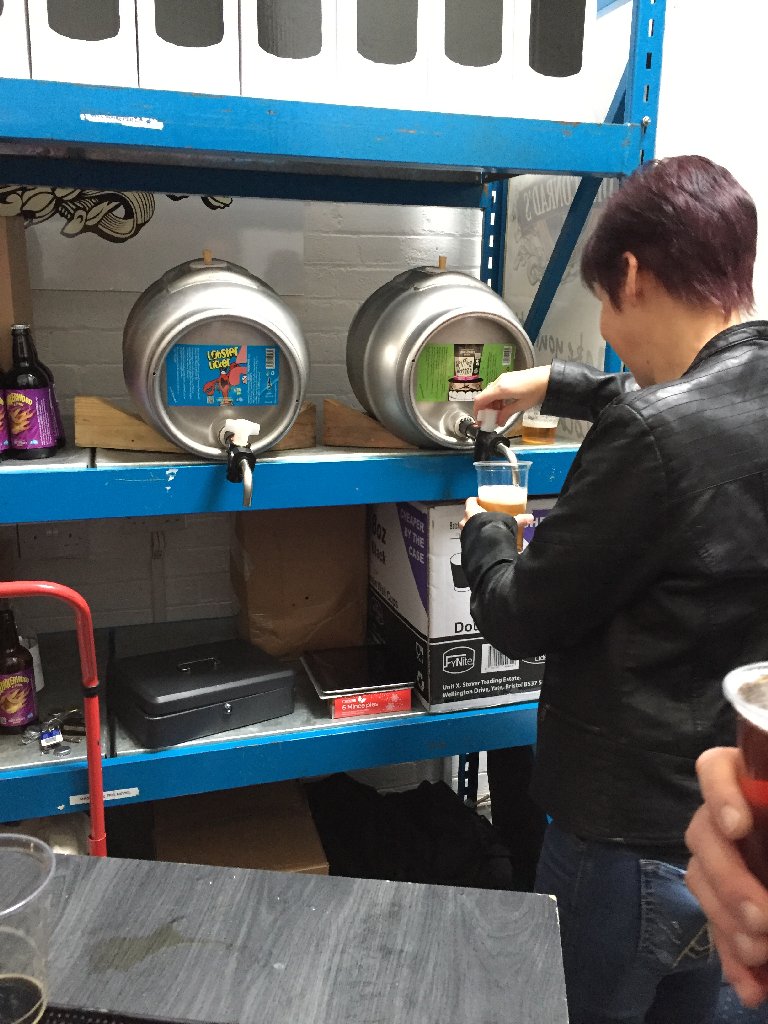 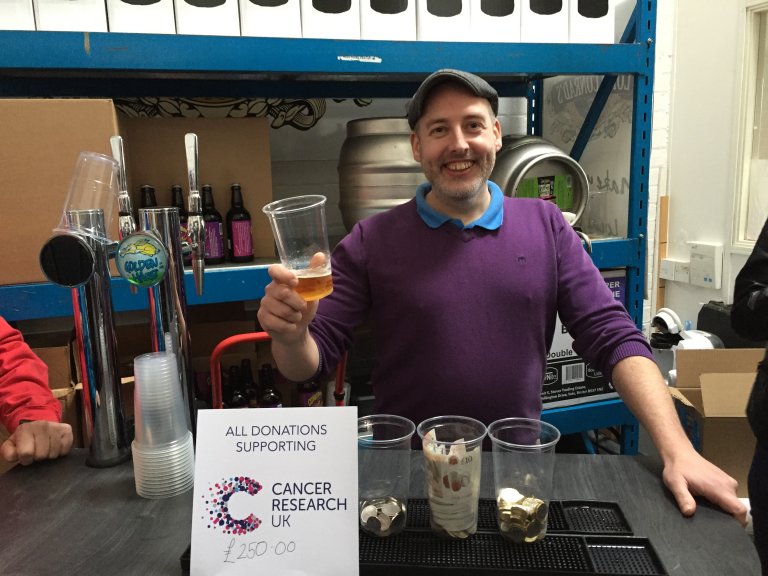 Back onto the coach, we hit the road again and headed into the unknown - well at least we didn't know where we were going. Negotiating the small country roads that we all love in our huge coach we found our selves coming into Conington, and therefore stopping at The White Swan. With ample beer on straight from the cask, we had the choice of Adnams Southwold, Adnams Ghostship, and St Austell's Tribute. With the sun still up (if not out) and the mild if a bit nippy weather, a few of us decided to enjoy a beer outside, whilst others kept to the warmth of the hearth inside. 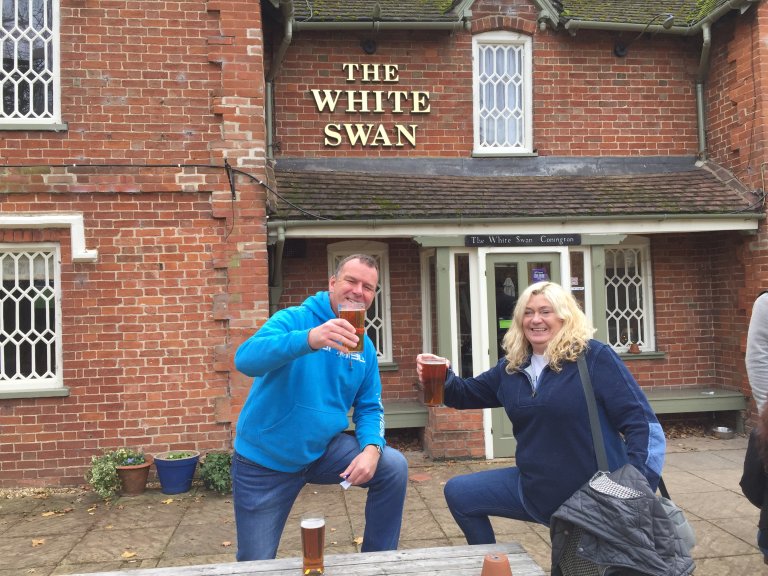 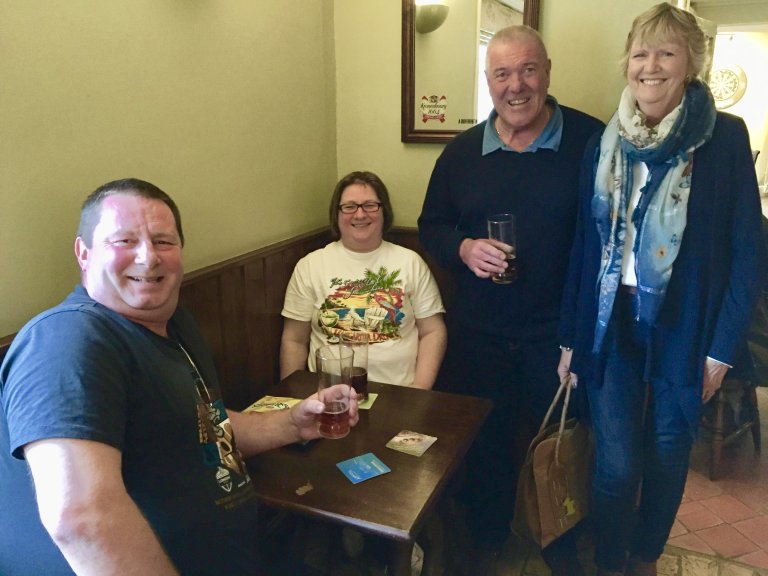 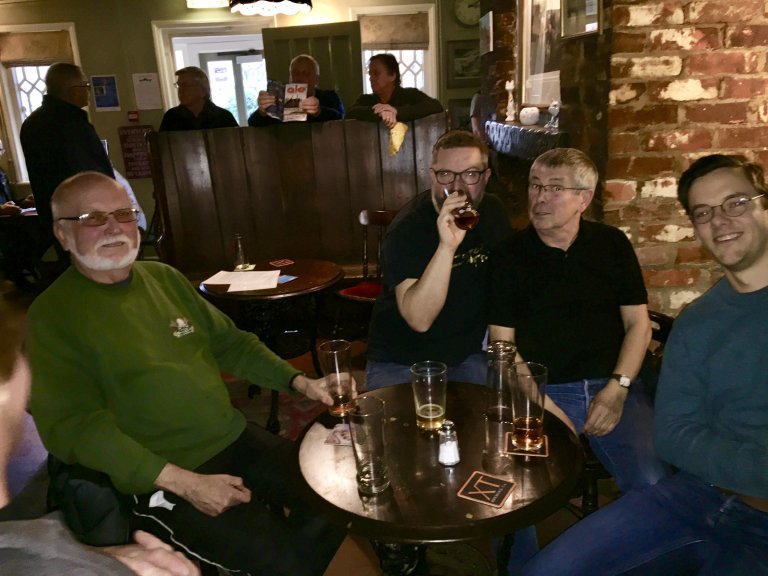 Another short journey through the country side, and the next phase of the mystery tour took us into Fenstanton. The 3 Fenstanton pubs to choose from caused a bomb burst once the coach pulled to a stop; the group dispersed and filed into the selection of pubs: The Crown & Pipes, The Duchess, and the King William IV. Some of us walked back to the Crown & Pipes to start this stage of the tour there, and found Eagle IPA to be on offer. Heading back down the road, The Duchess had a nice selection on including Adams Southwold and Ghost Ship, Fullers London Price, Sharp's Doom Bar, Elgoods Cambridge Bitter, and Intrepid Porter. The later was particularly good. Not all of us made it to all 3 pubs before the tour moved on, but those that went to the King William IV again enjoyed the beer on offer there.

The Crown and Pipes & The Duchess, Fenstanton 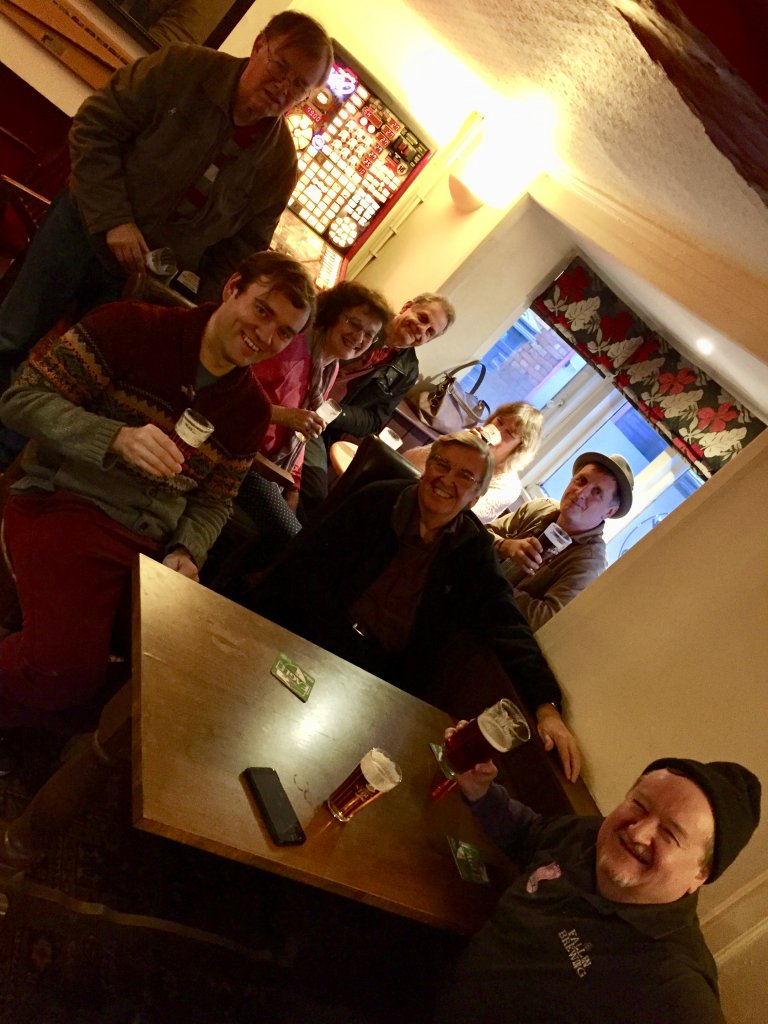 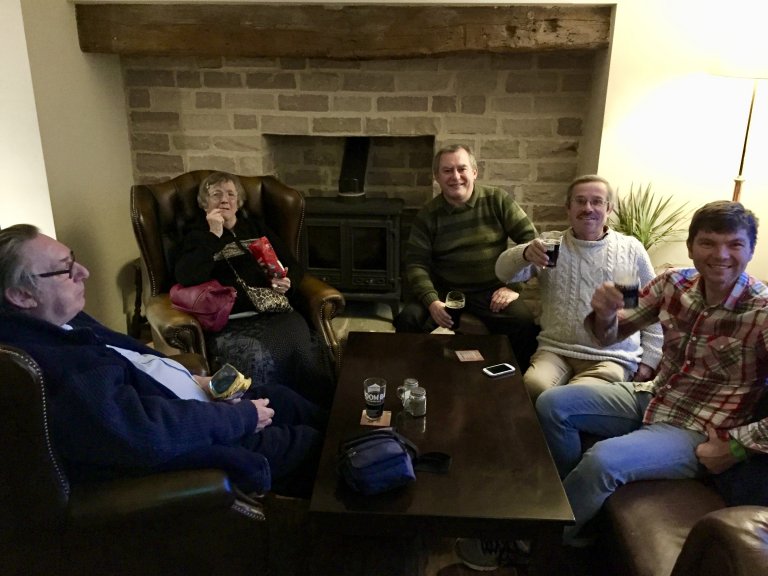 The sun long gone down it was time to move onto the next mystery location. Little is said about those of us who popped to the local chippy before leaving Fenstanton for a bag if chips to eat whilst in transit, I think we made a few mouths water. But it wasn't long before it was quite obvious that our next stop was in the Hemingfords. Hemingford Grey to be exact, and the pub was of course The Cock, with its usual variety of good beers available. Getting late in the day and a few beers in, this is where the beers available were on longer noted down, but the usual availability of a Nene Valley beer amongst others was most welcome. 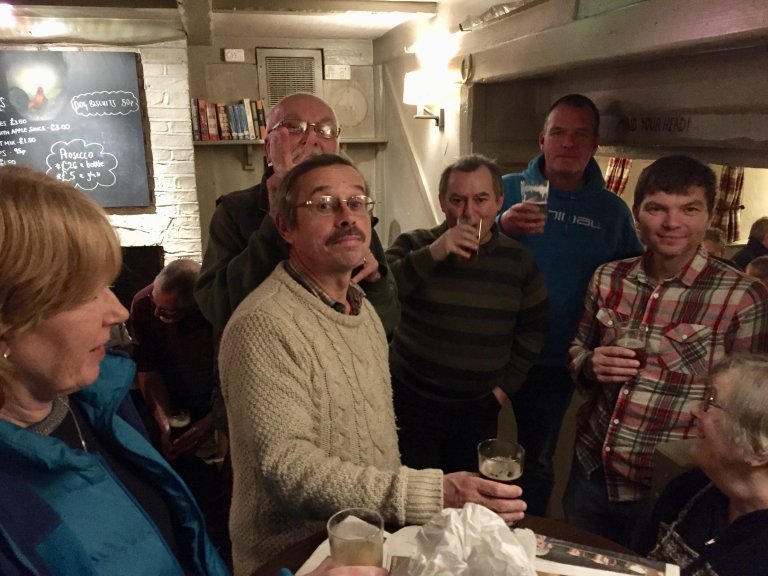 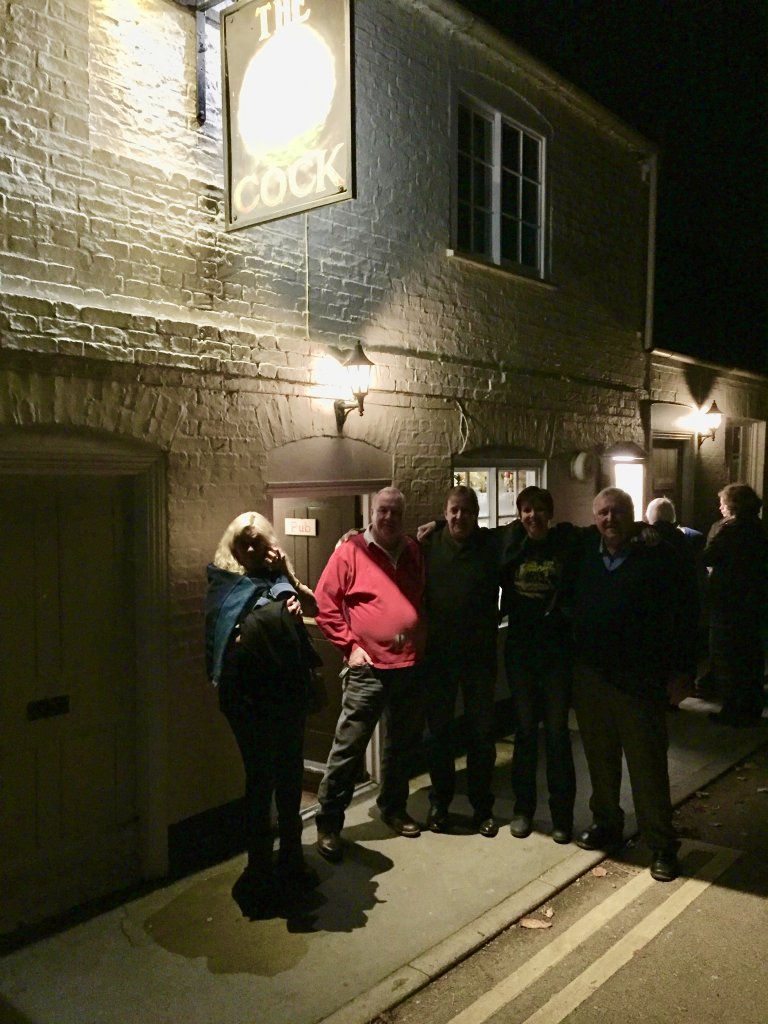 One final stop to go, which we all figured out based on one remaining section of the beer scoring sheet, was fairly safely guessed to be the Axe & Compass in Hemingford Abbots. A beautiful old pub, and a great place to have the last beer of the trip. The plethora of smiling faces captured at this last stop totally captures the mood and resounding success of another Hunts Branch Social. 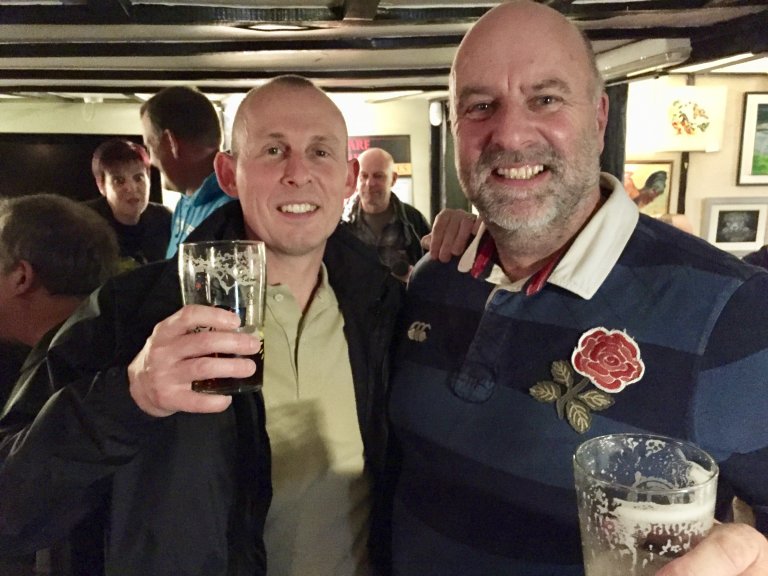 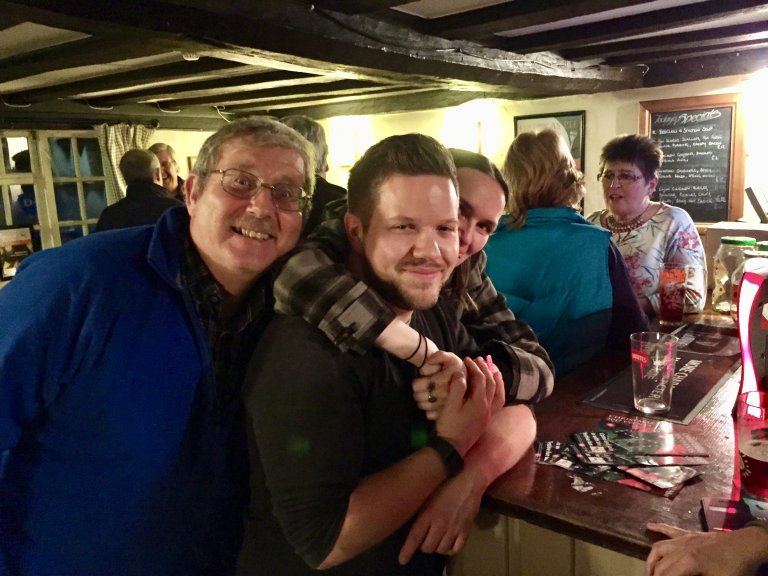 So the mystery fully revealed, everyone left the Axe & Compass having had a fantastic day of good beer and good company. It was only left to drop everyone back off at the usual places. Thanks too everyone who came along and helped to make this social as good as ever, and of course to our social secretary Juliet for the fantastic organisation. And thanks to all the pubs for hosting us all, we hope that this event also helps promote your fantastic rural pubs. 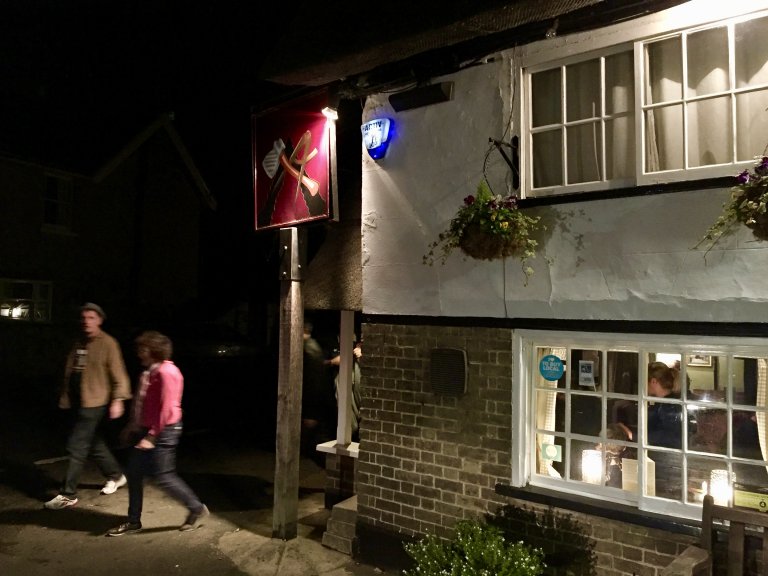 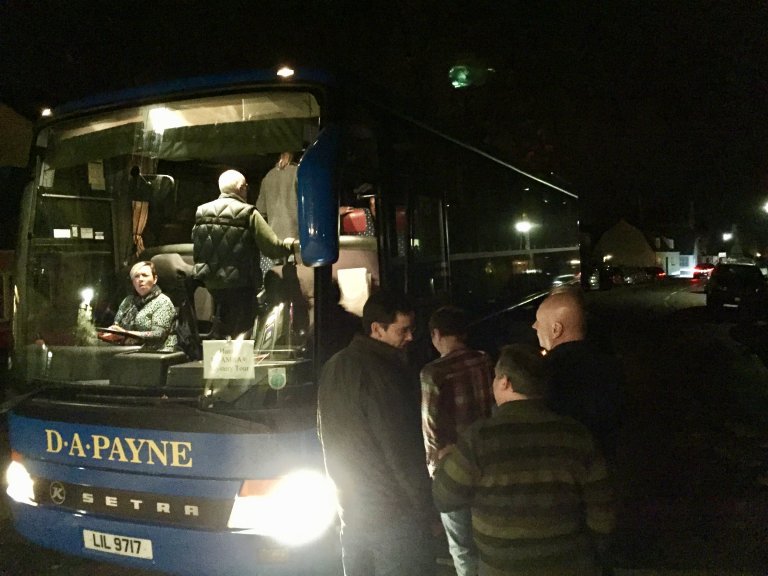