The walk starts and ends at the Cock, Old, Hemingford Grey, and allows for breaks in various pubs in Houghton and St Ives.

Hemingford Grey was originally owned by Ramsey Abbey in 1041, but eventually passed into the ownership of Reginald de Grey. Hemingford Abbots dates back to 974 and the church of St Margaret of Antioch dates from the 12th century. Houghton has many fine Georgian buildings.

How to get there: From the A14 going from Huntingdon towards Cambridge, take the turnoff for Hemingford Abbots, then follow the signs for Hemingford Grey. From the south approach via the A1096 road between St Ives and the A14, turning at the roundabout opposite the Vindis VW garage.

Parking: The Cock has a car park at the side of the pub. 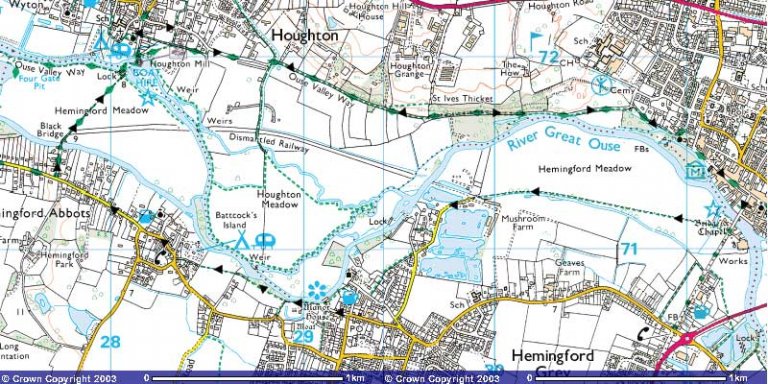 This walk starts along the riverside, then passes through the delightful Hemingford Abbots, continues across meadows and the River Ouse to Houghton, and along a wood path to St Ives. After refreshments the walk returns via further meadows and the back lanes of Hemingford Grey to the Cock.

From the front of the Cock, facing the road, turn right along the High Street, following the road towards the river; past many fine buildings from Glebe Cottage, a timber framed thatched cottage dating from 1583, to the attractive yellow brick River house, built in the late 18th century.

When you reach the river, continue along the riverside footpath, passing the gate to the Manor House. Originally a stone Norman Hall, built by Payn de Hemingford in the 12th century, it has since had many additions in varying styles. The original moat surrounds the house on three sides. Believed to be the oldest inhabited house in England, it is presently occupied by the family of the famous children's authoress, the late Lucy M. Boston.

Passing through a kissing gate, continue alongside the river, you pass across the Regatta field, site of a popular annual event, the last of its kind to still use ordinary pleasure craft rather than racing boats. Pass through another kissing gate, through a small wood, and across a field. Now the path passes between houses and holiday chalets. Hemingford Abbots Old School House

At the road turn right, passing through Hemingford Abbots, through the centre of the village, branching left at the Axe and Compasses. Continue past even more delightful thatches cottages, continuing along Common Lane at the end of the High Street. Note the Old School House - how many thatched schools do you know?

Turn right into Meadow Lane, crossing a bridge leading to Hemingford Meadows. Crossing the River Ouse again at Houghton Lock, you will arrive at Houghton Mill (National Trust), which is well worth a visit. Pass under the mill, and rather than take the river path, turn left and follow the road into Houghton village.

At the end of the village, when the houses end, continue to follow the metalled road, which leads to a good path through Thicket Wood. There is diversion through a nature reserve half way down the path. The path passes paths on the right that lead to water meadows, and past a Scout hut, then passing the gardens of houses on the left, eventually reaching All Saints Church in St Ives. There has been a church on this site since 970, but the current building dates fromthe 13th and 14th centuries and was extensively restored in Victorian times.

Walk through the church yard round the right hand side of the church, and pass through the wrought iron gates and down to The Waits, which takes you along the side of the river towards the centre of St Ives. Our route back to Hemingford Grey will now take you past the roundabout at the end of the Waits, either down Crown Street past the Royal Oak to your left, or down Merrylands to your right, both leading to Bridge Street, where you turn right and continue over the bridge. By now however you will be thirsty and there are lots of great pubs in St Ives.

Continuing over St Ives Bridge, note the chapel. The last prior of St Ives priory was allowed to retire to the chapel to live out the rest of his life after the dissolution of the monasteries in 1539. In 1736 it underwent restoration work and two additional stories were added to it. By all accounts this did little to improve it, making it rather ugly in fact. Over the next 200 years it passed through many hands and amongst other things was a private house, used for toll collection and even a Public House! It was now listed as an ancient monument and has been restored to its original size.

Passing by the Dolphin Hotel, immediately after take the public footpath on the right, signposted to Hemingford Grey. The path crosses Hemingford Meadow, and then follows the line of a tree lined ditch. Pass through 2 gates, across what was the old railway line. This leads to a rough road (Meadow Lane) beside a large garden with a lake. At the junction with Meadow Close, turn right and take the public footpath that passes beside the driveway on No 3, which passes between houses leading to a road where you turn left. At the next junction continue straight, and at the next turn right - you are now in Church Street walking through the heart of a quiet secluded part of Hemingford Grey, with many fine houses. At the gates of Hemingford Grey House, turn left into Church Lane, after a short walk you will find yourself back at the Cock, where its restaurant will await you. Bon Appetit!