The walk starts and ends at the White Hart, Great Staughton.

Great Staughton lies on the B645 (the old A45) midway between St Neots and Kimbolton. The village has a long, rich and varied history starting with a Neolithic settlement, a substantial Roman villa, an entry in the Domesday Book, and motte and bailey castle, later a fortified manor house featured on our walk. Our walk also takes in the old part of the village, including St Andrews church, and Place House.

How to get there: From St Neots or the A1, just follow the A645 and the White Hart is in the centre of the village.

Parking: The White Hart has a car park behind the pub, and there is room for parking on the road in front of the pub. 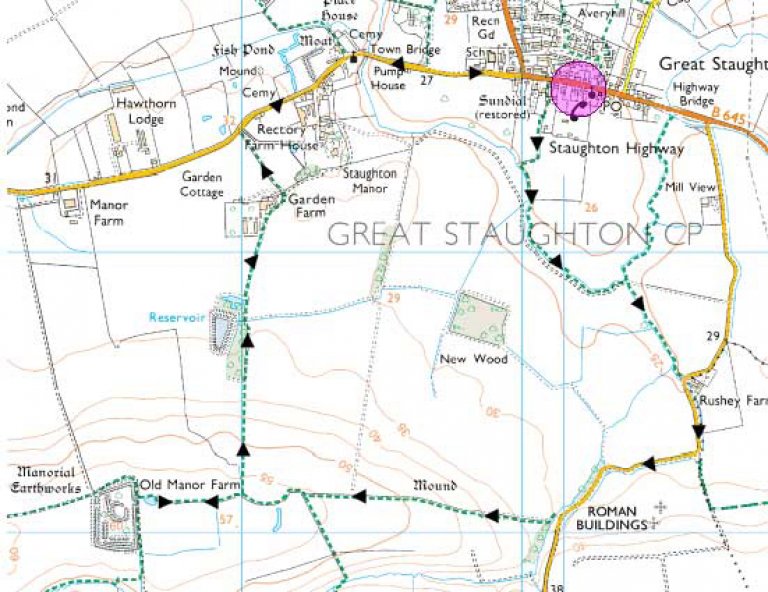 This walk starts by following the River Kym, heads south towards Staughton Moor with some rolling countryside with great views, skirts round the manor house stronghold of Sir Adam de Creting, and finishes with a walk through “old Staughton”, with a fine church and old buildings.

From the White Hart, cross the road and go right until you are opposite the old Sundial. Follow the marked public footpath on the left. At the gateway of Long Acre Farm, go over the stile on the right, and over a second stile into a field and go down the left hand edge.

At the end of the hedge and brook, you come to a road with Rushey Farm opposite. Turn right past the farm, and continue past the cottage on the sharp corner. At this point, looking towards the brow of the hill, is the site of a major Roman villa, and one can appreciate the advantages of the site with the well drained headland and the views across the valley.

Continuing along the road, you will pass a narrow coppice at the side of the road, and you should then cross and take the public footpath which crosses the stream and turns left along the field edge. Cross the footbridge into the next field and continue on the right side of the field up the hill. At the top of the hill, pass through the gap in the trees with a signpost.

Pause at this point to take in the view - down the hill in front of your is Manor House, where Captain Howey constructed his model railway earlier this century, the model for the Romney Hythe and Dymchurch narrow gauge railway. To your right at the brow of the hill is a burial mound, now largely ploughed over, associated with the nearby Neolithic settlement.

Although nothing now remains of the stronghold (called Cretingburgh or Cretingsbury in old documents), the strategic advantages of the location are readily apparent, and the views are impressive. It probably started life as a motte and bailey castle in 1275, and was added to and strengthened over the centuries.

Sir Adam de Creting was a knight of Edward I and marshall of the English army in Gascony, where he was treacherously killed in 1295, by his wife, it is said. His son John, who fought alongside his father in the French wars, was created Baron Creting in 1327 by Edward III. The manor subsequently passed into the Wauton (or Walton) family, and it remained in use until 1705. The Wauton family were a notable feature of Staughton’s history. Sir George Wauton’s memorial an be seen in the church.

Retrace your steps back passed the pool, and pass through the trees and turn left and go down the hill on the left side of the field. Continue on the track on the right, beside a small wood. The rough track joins a concrete track and continues through Garden Farm, with it’s bright pink farm house.

On the right is Staughton Manor House, an impressive regency mansion.

Continue over the cattle grid and on the track towards the road. At the road turn right through the old part of the village with many vernacular and period Georgian period buildings.

At the centre of the old village is St Andrew’s church a visit to which is recommended to see the double monument to the Dyer family.

Sir James Dyer was speaker of the House of Commons in 1558 and Lord Chief Justice of the Common Pleas. He died in 1582, and is depicted with his wife, Margaret, who died in 1560. The memorial also shows Sir Richard Dyer, who died in 1605, and his wife, Marie.

Next to the church is Taggart Gallery, once the Robin Hood Inn, behind which stood Murfins brewery (there used to be no fewer than 7 pubs in Staughton). The brewery continued to produce beer until the beginning of the 20C.

Opposite the church is Place (or palace) House, originally built in 1539 by Oliver Leder; it was in medieval times a substantial moated house, but much of it was unfortunately destroyed by fire in the 17C. The house now belongs to the Duberly family.

Continuing past the church, you will cross town bridge, pass the old vicarage on the left, and the new school on the left and old school on the right, and soon passing the sundial you will return to the White Hart.