The walk starts and ends at the Chequers, Little Gransden and includes a visit to the Crown and Cushion, Great Gransden. Great and Little Gransden are only a few hundred meters apart. This area was primarily a farming community until the Second World War when the Gransden Lodge airfield was the home of the 405 Squadron of the Royal Canadian Air Force. A stained glass window in Great Gransden Church pays tribute to the 801 airmen who gave their lives in 1941-45. Great Gransden has a village school, Barnabas Oley Church of England Primary, named after the founder, a Royalist vicar, started in 1670. In addition to the two church towers, a restored 17th century post windmill adds to the scenic skyline.

Parking: The Chequers has a large car park beside the pub. 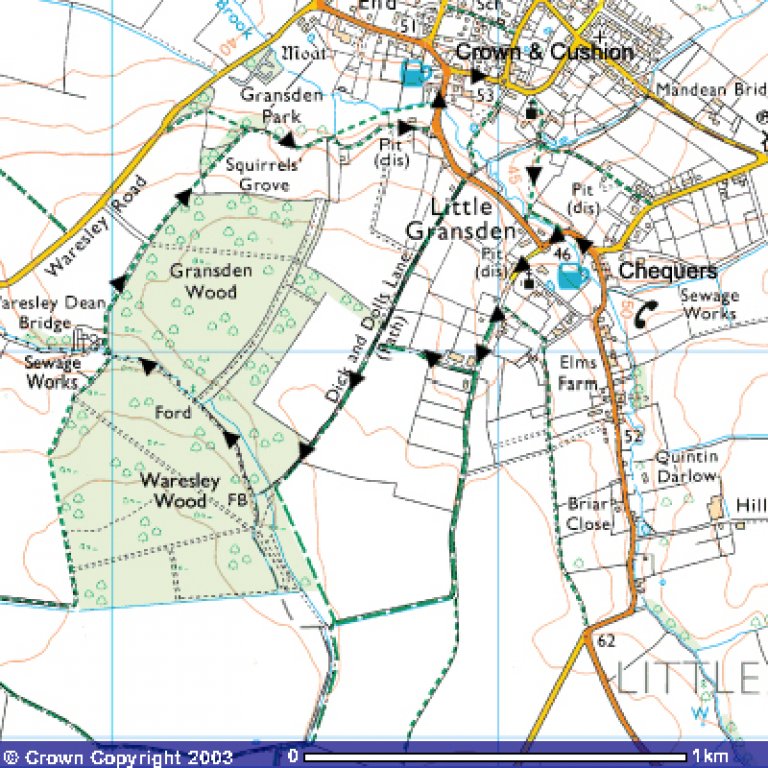 From the pub car park, turn left towards Great Gransden, and follow the road past a sharp turn to the left. At the second bend in the road, take the left turn into Church Street, walking past Little Gransden Church on the left and a row of fine thatched cottages on the right. Where the tarmac road ends, continue on a rough track, and after 300m, turn right onto a bridleway. Continue on the right hand side of the field. At the corner of the field, turn left joining Dick and Dolls Lane, along the edge of the field. Continue through a gap in a hedge to the next field, and follow the edge of the field with the wood on the right. After crossing a stream, bear right onto a path entering Waresley Wood Nature Reserve.

Waresley Wood is a fine example of the ancient woodland, which once covered much of the boulder clay uplands in this area. For centuries it was managed as coppice with standards, and is mentioned as coppice in Domesday Book. This management created the conditions in which woodland flowers thrive. Many ancient woods were destroyed in the years after the Second World War as agricultural practices changed. Waresley and Gransden survived, although 114 acres of Waresley were grubbed up between 1947 and 1973. A large part of Gransden was felled about 1929 and replanted with plantation species considered more useful than the native trees. Since 1980 some of these areas have been replanted with native species found elsewhere in the woods. Both woods are predominantly of ash and oak standards with an understory of hazel. Oxlip flowers in spring under the field maple and hazel coppice growing on chalky boulder clay, while bluebell, primrose and wood anemone flower under the birch on the drier acidic Greensand exposed in the small valley. The best time to do this walk is in early spring, when the full glory of the bluebells and primroses can be seen. Bob Mitchell, the landlord of the Chequers, recalled to me childhood memories of the village children descending on the wood on Easter Monday, to collect primroses and play hunting games using spears made from hazel twigs.

After 200m, turn right along a path past a wooden shelter. From the shelter, walkers wanting extended exercise will find wandering through the woods a rewarding experience. For those already thinking of slaking their thirst, take the direct route by ignoring the broad rides to the left and straight on, and instead turn right down a narrow path with a wicker fence on the left. Continue on this path, ignoring side paths to the left and right. This path follows the line of a brook on the right, and at two points allows access via footbridges to the North half of the wood. Our route ignores these diversions, and at the second footbridge, takes the left fork in the path at the bench, along a path that meanders and wanders, eventually leading to the main entrance to the woods.

At the entrance, turn right down a narrow path between the woods and the sewage works. After passing the sewage works, continue along the edge of a field following way markers. At the end of the field, pass through a gap in the hedge, and follow the left hand edge of the next field, in the direction of a thatched cottage. Through the hedge on the left are views of Gransden Hall. At the edge of the field, cross the stile and passing the thatched cottage, join a rough track. At the main road, turn left and continue to the Crown and Cushion.

After refreshing yourselves, retrace your steps down the slope and take the left hand turn following the signs for the Industrial Estate. At the roundabout, continue forwards to Great Gransden Church, a mainly 15th century building. To the north-west of the church is the vicarage, a brick house with tiled roof built by Barnabas Oley, vicar, probably during the second period of his ministrations from 1660 to his death in 1685. To the south is College Farm belonging to Clare College, Cambridge, an 18th century brick house with shaped gables and a tiled roof. Follow the path through the churchyard, over the brook, and across the graveyard. Passing through the kissing gate, cross a meadow in the direction of the Little Gransden Church tower. Pass over a brook, and at the road, turn left and follow the road back to the Chequers.