The walk starts and ends at the Black Bull, Godmanchester and includes a visit to the Samuel Pepys, Huntingdon. Godmanchester and Huntingdon are on either side of the river Great Ouse. Both towns have a long history, since both lie on the Roman road Ermine Street, which crosses the river at this point and caused the Roman town Dvrovigvtvm (modern Godmanchester) to be established. An Anglo Saxon settlement existing on the site of Huntingdon from 650 AD, but the town became firmly established with the building of Huntingdon Castle in 1068, the site of which we’ll visit on our walk.

How to get there: From the A14 dual-carriageway, exit at the interchange just south of Huntingdon. Follow signs for Godmanchester and Huntingdon. The Black Bull is on the right at the far side of Godmanchester.

Parking: The Black Bull has a car park behind the pub, and there is room for parking on the road in front of the pub. 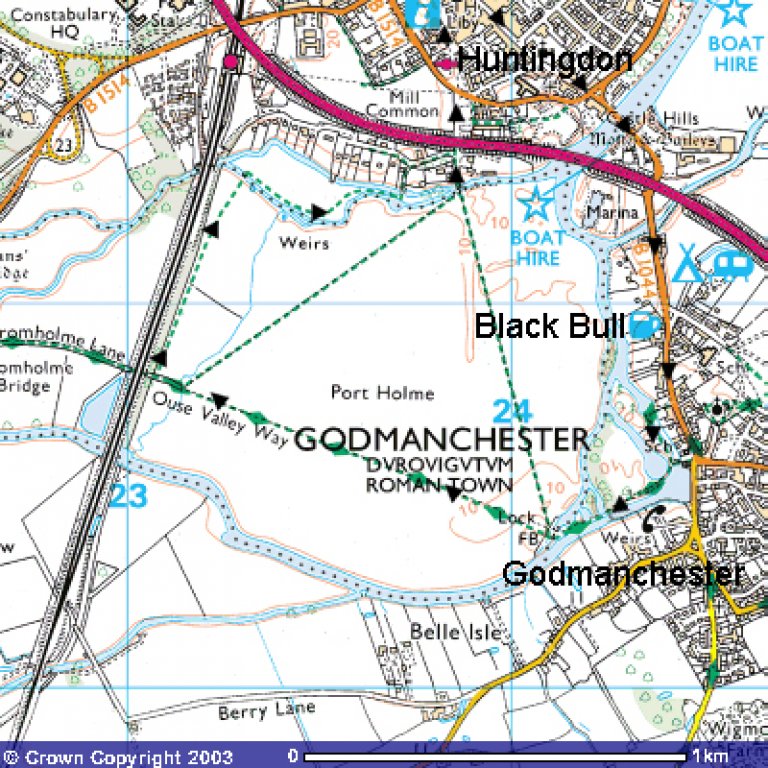 This easy walk from Godmanchester crosses the river Great Ouse, which forms the western boundary of Godmanchester, and then circles a vast common, Port Holme, which can be wet at times. At one time Huntingdon Racecourse was here, and in the First World War it was a training airfield. Now it is sensitively managed, a designated Site of Special Interest, where snake’s-head frtiillaries and cowslips grow.

Beyond the common, and after crossing another arm of the river, the walk enters Huntingdon , going as far as the church and the old grammar school where Oliver Cromwell and Samuel Pepys were educated. Allow extra time to explore the town cetre, if you can. The return is down the High Street and across a new footbirdge besdie the ancient 13th century stone roadbridge, to Godmanchester. The old bridge has many recesses on each side into which pedestrians could go to avoid the passing horses.

Leave the Black Bull, going south, left, towards the town centre of Godmanchester. In about 300 metres, opposite the Rose and Crown Quaker Centre, go right into Mill Yard and cross a couple of sluices to the other side of the river. Follow the river on your left, passing a children’s play area on the right, until you reach an elegant, white, wooden footbridge. This is the Chinese Bridge, originally built in 1827 and replaced by a replica in 1960 by Godmanchester Borough Council.

Continue past the bridge and cross a stretch of water by a bridge and weir, with water rushing towards Huntingdon. Keep on with the fast-flowing river on your left. Cross tow wooden footbridges, bearing ‘Ouse Valley Way’ signs and continue on over a lock by means of a concrete bridge. You are now on the 225 acre Port Holme common. This is part of the flood plain of the river Great Ouse. Away in the distance on the far side of the meadow you can see a reddish-painted steel railway bridge, which carries the railway over the river. You head to the right of that bridge. When get nearer to the railway, the way will become clearer to see. You are making for a narrow lane which leads to a brick-arch railway bridge. When at the far side of the meadow go through a metal kissing-gate, over a brick cartbridge into the lane towards the railway.

Do not go quite as far as the railway arch but turn right, through a dilapidated wooden gate about 50 metres short of the railway. Walk through the meadow, parallel to the railway embankment, for over 400 metres, near the end swinging right a little to go up three brick steps and over a wooden footbridge.

After the bridge go right, on the path that meanders through scrub, some 2 metres high at first, then continue through low scrub until eventually you reach a wooden gate. Go through the gap beside the gate and over a weir with a sluice gate, made in 1931 by Ransomes and Rapier in Ipswich.

In 50 more metres go left over another cart bridge by a sluice and climb on up the farm lane to join a narrow road. Straight ahead beyond the garden of the large house is the embankment carrying the hurtling traffic along the A14 road.

Go right along the minor road, passing the Edward House Trust, with a crown atop three narrow lozenges in the brick porch of the house, to a T-junction. Go left under the road. Ahead of you, across two lanes of fast moving traffic, lies Huntingdon. You could wait all day to cross, so go left for 80 metres to a light controlled pedestrian crossing, and cross in safety. Bear right past the coach station towards the green and go left into Princes Street. This will take you to the Market Square, All Saints’ church and the Town Hall opposite it, and across the road from the church is the four-square Norman building which is now the Cromwell Museum, for you are, as the Tourist Board proclaims, ‘ in Cromwell Country’. Also in the Market Square is the excellent historic pub the Falcon.

From the museum turn south-east along the High Street, passing All Saints Passage and Literary Walk to the stub end of High Street, where you may wish to take some rest at the Samuel Pepys. Continuing on down the High Street, with great care, cross Castle Moat Road. On your right you can see the remains of the old castle on Castle Hills, topped now by an Armada Beacon basket. Keep on, past the Old Bridge Hotel on your right (also recommended for good real ale but not if you are wearing muddy boots!), and then for safety’s sake take the modern footbridge beside the narrow, old stone road bridge over thew river Great Ouse, and go on under the A14 road and into a lime tree lines Post Street, back to Godmanchester and the Black Bull.