The walk starts by following the Clopton Way, a 17km (11 mile) walk from Wimpole to Gamlingay. The walk proceeds along a ridgeway with some fine views, and passes through the medieval village of Clopton. Climbing over the ridge, you pass an aerodrome, pass through the hamlet of East Hatley, and return via another section of the Clopton Way. The village of Croydon and the nearby village of Clopton were recorded in the Domesday Book. The church is originally 14th century with later additions and rebuilding.

Distance:9.8 km (6.1 miles). The walk can be completed in approximately 3 hours.

How to get there:Croydon lies off the A1198 road between Huntingdon and Royston. From the north, leave the A14 at the Godmanchester interchange then follow the A1198 for 13 miles. From Cambridge and the east take the A428 towards St Neots. Turn left onto the A1198 at the Caxton Gibbet roundabout. When entering Arrington, take the road to your right signposted Croydon.

Parking:The pub has ample parking at the front and the side, but it is strongly advised that you do not use the pub car park unless you plan to use the facilities of the pub. There are plenty of parking spaces on the roadside. 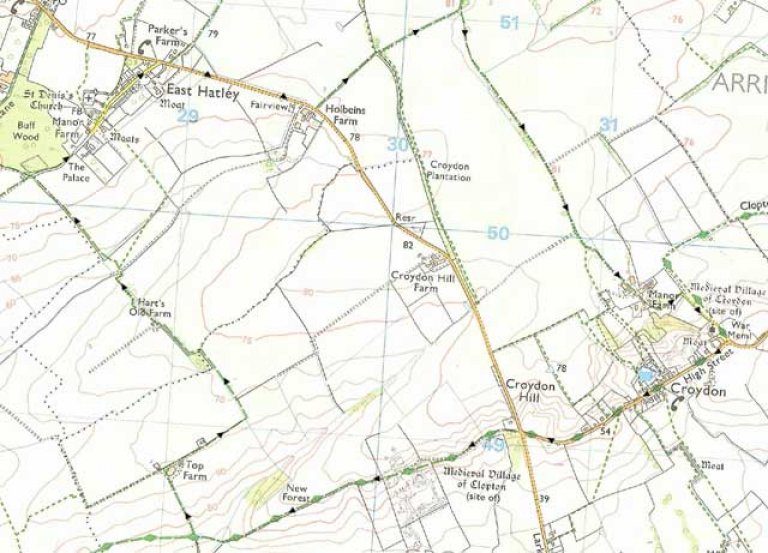 From the Queen Adelaide turn right and follow the road. At the T-junction, cross over the road and follow the Public Bridleway signed Clopton Way. The track follows the left hand side of a large field and continues on the slope of a gentle hill, giving fine views to the South.

At the corner of the field, by a gate, is an explanation of the medieval village of Clopton, the remains of which are in the field immediately in front of you.

The medieval village of Clopton is mentioned in the Domesday Book, and is known from documentary sources to have had a market in the 13th century. The village seems to have gone into decline during the later middle ages, and was finally deserted during the early 16th century when the land was purchased by John Fisher. By enclosing the common strip fields into large pasture fields, the villagers were stripped of their livelihood and ejected from the countryside.

Cross the village enclosure following the same track, and pass through a gate with a stile at the boundary. The Clopton Way continues on the track alongside the field, and where the track crosses a concrete road, turn right going up the hill.

Approaching the appropriately named Top Farm, continue straight past the left side of the grey barn, and then turn right past the aerodrome and hangar, which contains a variety of light, mostly single seater, aircraft.

Continue following the tarmac path between two hedges. Passing a bungalow, the path continues straight along an earth track.

Pass through another gap in the trees, and ignoring the yellow way marker and the track veering to the right, follow the grass track round to the left, and then continue right along the field edge heading for a gap in the hedges.

The grass track continues between two large fields, and reaches an earth track, where you turn right towards the village of East Hatley.

The track turns into a tarmac road, and continues past a farm and houses.

For an interesting diversion, take the footpath off to the right to St Denis’s Church, which is disused; the graveyard has been turned into a nature reserve.

Continue along the road until you meet the main road where you turn right. After 750m, and after passing Holbeins Farm, take the marked public bridleway off to the left. The track goes between hedges to the left of a field, then passing between trees and through a gate, to continue straight to the right of a hedge.

On reaching a tarmac road, turn right, and continue on the road for 1,500m. Pass straight through the farmyard of Manor Farm, past barns on both sides. Continue past the bungalow Manor Fields.Further on the drive takes a right turn,and at this point you have joined the Clopton Way again, with the site of the medieval village of Croydon in front of you. Continue down the hill, past All Saints Church and at the War Memorial, join Croydon High Street, turning right to return to the Queen Adelaide.

Other local attractions: The National Trust property Wimpole Hall, a large 18th century style mansion, is a few hundred yards away. There is also the NT farm, Wimpole Home Farm - a working farm with rare breeds, and with a collection of farm machinery as used here over the last 200 years. Both are open from the end of March until the beginning of November, but not on Mondays or Fridays, except bank holiday Mondays. They are also open on Fridays from mid July to mid August. For times ring 01223 207257.

Queen Adelaide, Croydon [Note: This pub is currentry (May 2016) closed but is hope to reopen before the3 end of 2016]